A Summary of and analysis on The 4th Revolution: How the Infosphere is Reshaping Human Reality by: Melanie Desmarais

Our way of understand the world and ourselves has changed. Luciano Floridi, professor of philosophy and ethics of information at the university of Oxford, suggests that humanity has been through four revolutions (p.93). In the era of Nicolaus Copernicus, humans were at the centre of the universe. For Charles Darwin, the animal kingdom evolved through natural selection. Sigmund Freud suggested that humans are rational beings who are in control of themselves. Finally, the last era is recognized thanks to the trailblazing works of the computer scientist, Alan Turing, “father of the fourth revolution” (Floridi, 2014, p.93). In this  revolution, “we are informational organisms (inforgs), mutually connected and embedded in an informational environment (the infosphere)”, and in which, “we share with other informational agents, both natural and artificial” (Floridi, 2014, p.94). In the book titled, The 4th Revolution: How the Infosphere is Reshaping Human Reality (2014), the author Luciano Floridi uncovers how we as humans, or inforgs, understand ourselves within the infosphere. 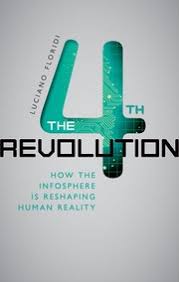 The role of ICT’s

We are aware of history and past evolutions today thanks to those who were able to document or record past events, and thus, allow future generations to be informed. We are then  able to take a look at the accomplishments and mistakes and learn from them. As Floridi suggested (2014), it is through this system that “humanity entered into history” (p.1). In the current age of hyperhistory, a concept that highlights the relationship amid individuals and their social well-being, we are truly dependent and no longer related to information communication technologies (ICT’s) (Floridi, 2014, p.3). We as users depend on ICT’s because they allow us to interact with one another and the world that surrounds us. They are influential factors that aid in the development of  “who we were, who we are, […] who we could be and become” (Floridi, 2014, p.1). The dependent relationship can be with two machines that share a network or between the user and the machine, trying to improving the interaction between the two. It is through these networks that large quantities of data is recorded and processed. In the hyperhistory age, everything is recorded and saved. Overtime, will we have enough storage for all of the data? Or, will we run out of storage. Floridi (2014) questions if big data will be able to decide for us, what is worth saving and what is not (p.21). 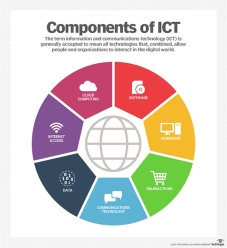 In his book, the author relates the infosphere to being the “in-betweenness” of technology, and identifies three different types. “What the sun does is to prompt the development and the wearing of the hat”  is first-order technology since technology is in between the user and the prompter (Floridi, 2014, p. 25). When a user is holding a screw (technology) and inserting it into a screwdriver (technology), this is second-order technology. Finally, in third-order technology, the chain reaction strictly involves technology. With this, the interaction between the user and the prompter is becoming less apparent to the eye. For instance, this could simply be the capacity of your smartphone being able to connect automatically to the internet or Bitcoin technology, the virtual currency, that challenges the usefulness of the paper format (Floridi, 2014, p.47). This is just one of the ways in which a cloud is developing between the online and the offline life, making both appear like reality. Finally, as this shift continues, “the infosphere will have moved from being a way to refer to the space of information to being synonymous with reality itself” (Floridi, 2014, p.50).

As indicated in the book title, the infosphere is reshaping human reality, and in this case, it is doing the same in reshaping human identities. Identity is a construction of what we think of ourselves and what others think of us. With ICT’s and their ability to increase and modify the channels of communication, many micro narratives are created and even the smallest piece of information becomes part of your story. However, we have become hyper-self-conscious because we are constantly worried about what others think of us and it is so easy to modify our identity online. In the future, as we willingly share our memories publicly, we are “decreasing the degree of freedom we might enjoy in redefining ourselves” and thus, creating less independence in the construction of our personal identities (Floridi, 2014, p.72).

Historically, Ancient Greece recognized citizens for biological reasons. The Roman Empire began interlacing citizenship with the law, certifying the status. In modern day, being a citizen of a country is not limited to biology, in fact, “geography started playing an equally important role, mixing citizenship with language, nationality, ethnicity, and locality” (Floridi, 2014, p.170). With the passport, geography became more flexible, allowing people to travel but still authenticating their identity. The state finds itself being the main controller of information. However, with the rise of ICT’s, and their empowerment abilities, permitting multiple voices with information to share, Floridi (2014) says that this is creating a decentralized governance (p.172). More specifically, for global issues, non-governmental organizations have become more influential. The concept of multi-agent systems can be utilized in this circumstance because the state is not longer alone in having the informational power and acting upon global issues. In any case, ICT’s are creating tension between the state and other agents since the state is no longer the only one with influential power.

Within the infosphere, Floridi (2014) elaborates on the idea that everything is reproducible and standardized. We expect it, it is simply part of our culture. This system exists in the music industry, in the food industry and the fashion industry, to name a few examples. He also explains that we rely on “indicators rather than actual references” (Floridi, 2017, p.58) to make decisions. For example, we rely on the ratings provided on Trip Advisor to choose a restaurant. In addition, this also exists in the marketing industry. Marketers are able to use data analytics to analyze the human behaviour. With this, they are able to create categories in order to establish different types of people. For example, there are types of citizens, types of customers, types of drivers, to name a few examples. The author describes this as “de-individualizing” individuals but on the other hand, it can be “further used to re-identify us as specific consumers for customizing purposes” (Floridi, 2014, p. 58).

Alexander Nix, the CEO of Cambridge Analytica, presented The Power of Big Data and Psychographics with relations to his political campaigns at the Concordia Annual Summit. He mentioned that most marketers still “segment their audiences today by demographics and geographic” (Nix, 2016). With that being said, psychographics brings segmentation to a new level by “understanding of your personality because it is personality that drives behaviour” (Nix, 2016).  Through big data analytics, marketers are able to dig deeper and identify specific patterns of interests, attitudes and lifestyles in order to know what messaging will be most successful to your audience (Nix, 2016).

Making a Link to Blockchain Technology

As previously stated, with all of the possibilities and influence that ICT’s have brought into the infosphere, the state is no longer the primary holder of power and information, other stakeholders are able to speak up and have control on certain issues. The traditional centralized government is becoming decentralized through a system that welcomes multi-agents. More specifically, in the book chapter concerning Politics, The Rise of the Multi-Agent System (2014), the author shines the light on power as a factor to explain this new information system. ICT’s ““democratize” data” and this data “reside and multiply in a multitude of repositories and sources” (Floridi, 2014, 175). The new technology that is being developed that will have a significant impact on this issue is the blockchain. This technology is defined as “a database which stores permanent blocks of information such as transaction history, to be shared within a particular community” (Briggs, 2018). This complex system will allow individuals to have more control over their personal information by seeing a detailed history of non-modified or replaced information. Presently, our personal information such as transactions, contracts and our identity certifications can be found in databases from multiple organizations. With this technology, it will have the power to “eliminate entire class of work that maintains, enforces, confirms that contracts are executed”(Berg et al., 2017). However, what is beneficial for the user is the opportunity to have have all of their personal documents in one secure network.

To conclude, as we can see, there are many changes and evolutions occurring in the infosphere and our dependence on ICT’s. Luciano Floridi explains that users have allowed technology to envelop and intertwine itself, making the online and offline appear to be more blurred than ever. ICT’s help us discover and establish who we are, but he wonders if big data analytics will go as far as predicting our interests. With psychographic analysis, Alexander Nix was able to explain that we no longer need to play a guessing game to know if a marketing campaign will be successful. ICT’s have the ability to empower agents on issues that attaint a global scale which then creates a tension with the state. With the rise of blockchain technology, it will revolutionize the way in which we gather information.

Nix, A. [Concordia] (2016). The Power of Big Data and Psychographics. Retrieved from https://www.youtube.com/watch?v=n8Dd5aVXLCc&feature=youtu.be

View all posts by melaniedesm1994